A parent is likely to pay attention to their child’s every giggle, hiccup, and cry for clues about how they are doing physically. However, some symptoms of a problem can be more difficult to notice than other signs of a problem. For example, your baby’s bowel movements will change considerably throughout their life. Those alterations could be an indication that your baby is constipated from time to time.

Continue reading to learn more about what causes constipation in babies, including the symptoms, causes, therapy, and other factors involved.

Symptoms of Constipation in Babies

It is possible that a newborn who exclusively consumes breast milk will not have bowel movements on a consistent basis. Almost the majority of the nutrients are absorbed regularly. This is a fairly regular occurrence. As a matter of fact, babies who just consume breast milk nearly never get constipation. In contrast, formula-fed newborns may have three or four bowel movements each day or once per few days, depending on their diet.

Regular bowel movement patterns in healthy babies, on the other hand, vary significantly and are greatly influenced by the type of milk taken, whether solids have been introduced, and which specific meals are consumed. Learning about the signs and symptoms of constipation might help you identify a potential problem before it becomes a big problem.

What Cause Constipation in Babies

A typical cause of constipation is when waste or stool passes too slowly through the digestive tract, resulting in a hard and dry stool. When a baby is approximately 6 months old, paediatricians generally advise parents to begin introducing a range of meals to their child. The type of excrement that your kid generates is mainly controlled by their food during the day. Constipation can be brought on by a range of different meals. Children’s nutritionists commonly recommend starting with the ABCs: applesauce, bananas, and breakfast cereal. A high intake of these foods, particularly rice cereal, can result in health concerns. The introduction of table foods may make it even more difficult to determine the source of constipation in your child.

Constipation in children can be caused by a variety of reasons, including the following:

How to Treat Constipation in Babies

Change in Formula or Mom’s Diet

It is possible that a change in formula or in the diet of the mother can help alleviate constipation in formula-fed and breast-fed babies, respectively. While solid foods, which are typically the source of constipation, can also be beneficial in treating the condition. Several fruits and vegetables, such as pear and broccoli, as well as fruit juice and water, might assist your child in regaining their fitness routine. Consider consulting with your paediatrician before trying further treatments if a diet change does not help. The doctor may recommend rectal stimulation with a cotton swab or a rectal thermometer. Most of the time, this results in bowel movements occurring within a few minutes of the stimulation.

In addition to the usual feedings, provide your baby with a small amount of water or a daily serving of 100 % apple, prune, or pear juice as a supplement. These juices include sorbitol, a natural sweetener that has laxative properties. Start with 2 to 4 ounces (approximately 60 to 120 millilitres) and experiment to see if your infant need more or less fluid than that amount. Pureed peas or prunes are excellent choices for babies starting to consume solid foods since they include more fibre than other fruits and vegetables. Whole wheat, barley, and multigrain cereals are all good choices because they contain more fibre than rice cereal.

Movement helps to speed up digestion, which in turn aids in the direction of things through the body at a faster rate. Leg bicycles may be helpful if your children can’t walk independently. If you gently massage your child’s stomach and lower abdomen, the bowels may be stimulated to pass a bowel movement. Massage your child multiple times during the day or until they have a bowel movement 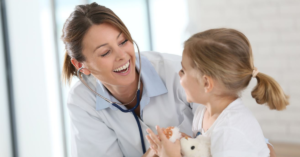 If you are ever unclear or concerned about something, you should consult your child’s paediatrician. With the help of a few natural treatments, your child’s constipation will nearly always resolve itself. Consulting with your doctor for assistance or suggestions can be advantageous if none of the above tactics proves successful. You will also be assisted by your doctor in recognising other signs and symptoms (such as fever) that may suggest the presence of a more severe illness that requires medical attention and treatment.

Written By
Shafikah
More from Shafikah
As simple as it may seem, proper handwashing is still the most...
Read More

We use technologies to personalize and enhance your experience on our site. By using our site, you agree to our use of these technologies.